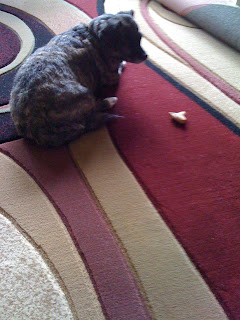 So much time and so little blogging. I'm sorry! Oh I have a blog follower, a real live confirmed blog follower. She is not family or someone I have begged (like Jenny) to read my blog. I'm so excited. That's not really why I'm writing this post. I have had so many thoughts and ideas go through my mind lately that I really needed to post. We got this new really cool rug. Of course Poprock saw it first and liked it. When I saw it all I could think of was how cool and fun it would be to drive the match box cars on. Both Precious and Ralphie have given it their approval. The boy was shown by his mom how to drive the cars and follow the curves, which then got the girl and their daddy doing the same thing. The boy however did find some humor in following the curve under the coffee table as far as his little fingers could push it, Poprock did not find the humor. The baby has found it soft and easy to wiggle on. 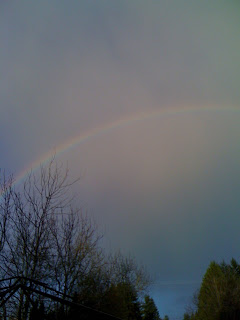 There was a rainbow the other day over our backyard. I love rainbows. 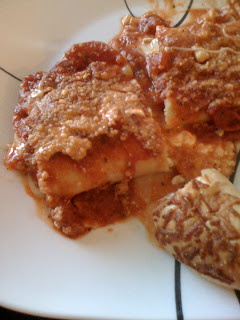 We watched the movie "Julie and Julia" It made me feel inspired and reminded me that I love to cook. I hate doing dishes. It really has been a long time since I've cooked everyday, I have Poprock, he cooks and does dishes (I'm so blessed and dang lucky). When Mark was sick with cancer cooked food usually didn't taste good and the smells, smelled bad to him. I stopped cooking except for what he wanted. It was the best of times and the worst of times....that's from a book. I'm not saying I'm going to do like Julie and cook all the recipes from Julia's book, trust me I have no desire to bone a duck. I do however have some great cookbooks, magazines and know how to use the Internet if I need more ideas. I am however going to starting posting once in awhile some of the good things I find. I tend to find a recipe and use what I have at home to make it. These lasagna roll ups were surprisingly quick and easy and I was able to use what I had because I didn't buy everything the recipe called for. The recipe called for ricotta, I had bought some cottage cheese, so I used it. I had mozzarella rather than the called for Swiss cheese. I did however remember to get the pepperoni. We had the sauce at home. For the seasoning I used "Herbes de Provence" which I had previously purchased from World Market. The quick CindyLou version, cook the noodles, mix 2 teaspoons seasoning into 2 cups cottage cheese, slice the mozzarella rather thin. This made six roll ups. After noodles are cooked layer, cottage cheese, 6 slices pepperoni, mozzarella and roll, put seam side down in lightly greased baking dish. Top noodle rolls with sauce and bake at 350 degrees until bubbly. Great with a salad and bread.
Posted by Cindy Lou at 2:39 PM

I was also inspired by Julie & Julia, the movie. I'm looking forward to the recipes that you will share!

SOME OF MY FAVORITE PLACES